A detailed history of St. Michael's

Saint Michael : above the entrance to the chapel
In the early 1860s there was no consecrated ground for the burial of Catholic people within the boundaries of Sheffield. This came about largely because of past persecution resulting from the English Reformation of the 16th century. Father Burke of St Vincent‘s Church on Solly Street in the city, being quite concerned about this began a search for a suitable burial ground and finally purchased an eight acre site on a sloping hillside in Rivelin Glen. The plot of land was bought for £600 in the Spring of 1862 from Mr. Wilson of Loxley, a member of the famous Wilson family of snuff manufacturers. The site was quickly enclosed and walled off at a further cost of £250 and received official Government approval as a burial ground on August 25th 1862.

On September 29th 1862 (Michaelmas day) Robert Cornthwaite, Bishop of Beverly laid and consecrated the cornerstone of the original St Michael’s chapel. When later writing about the laying of the cornerstone, Father Burke revealed the names of some of the benefactors who helped pay for the cemetery. He wrote, “a few humble Irish Catholics who had by good conduct and honest industry, realised a little property, offered to supply £500 or £600 to purchase a graveyard”. They were Michael Monaghan, Lawrence Brown and James Callaghan.  A further £200 was donated by Mr. Hodgkinson – “a worthy English gentleman” and these four along with Father Burke and Arnold Sutton of Revell Grange were named as trustees of the cemetery.

It is believed that that the first interments in the new cemetery took place on September 23rd 1862 when two young children Mary Mulvey, aged three and Catherine Hopkins, aged seven were buried at St Michael’s.  By the summer of 1863 the work on the cemetery and its chapel were complete with the final cost coming to £1,400. On October 26th 1863 the chapel was blessed by Father Burke and dedicated to St Michael The Archangel. In December of that year the St Vincent Catholic Young Men’s Society donated a statue of Saint Patrick and a set of bas relief Stations of the Cross which were erected in the chapel.

The original chapel was always meant to be a temporary building and in 1877 a new permanent building was erected at a cost of £2,000, which was donated by George Harvey Foster, a local businessman in the tailoring trade, and his wife Mary Ann. This gift is marked by a marble plaque on the right (epistle) side of the chapel. The new chapel was opened and blessed, again by Robert Cornthwaite (now Bishop of Leeds), on December 11th 1877.

George Harvey Foster (1829-1894) married Mary Ann Stodart (1832-1895) who was originally from Durham and they had four sons and two daughters. The sons and daughters erected the impressive Foster monument at St Michael's cemetery in memory of their parents.  He ran a business having several tailoring and gents' outfitting shops in Sheffield which was ultimately known as W Foster & Son Ltd.  The business had been established in Sheffield High Street by George Foster in 1769.  At various times over the years there were Foster's shops in High Street, Waingate, Castle Hill and West Bar.  When Sheffield High Street was widened in 1895 the main W Foster & Son building had to be demolished and as part of the improvements one of the new structure consisting of ground floor shops with offices above was built near Fargate and was called Foster's Buildings and can still be seen today.  W Foster & Son Ltd was successively run by four generations of Fosters (ultimately by the widow of George Harvey's second son) for 176 years until severe air raid damage in 1945 led to its demise.

The chapel is in the Early English style and was designed by the architects Messrs Hadfield and Son with Mr. M.J. Dowling used as the contractor. It is built of dressed Greenmoor wallstone with Worrall stone dressing, internally it is 22 feet wide and 72 feet long, the roof is covered by Staffordshire tiles. At the chapel’s western end is a sixty foot high bell turret in which hangs a five cwt bell by Mears of London. The chapel was designated a Grade II listed building in December 1984.  The cemetery’s most noteable grave is the Walsh monument which is a Grade II listed structure. This is a vault and memorial constructed for the Walsh family, it consist of mostly granite and marble with decorative cast iron railings and a 1.5 metre high figure on top.

Before the present St Michael's Chapel was opened in 1877 there was an original small chapel on the site.  Over the years the present building fell into disrepair but an extensive renovation work to restore it to its former glory, with the help of English Heritage, was completed in 2005. The finished work both, inside and outside, is fitting testimony to the generosity of the people of St Vincent's who can be justly proud of their accomplishments. 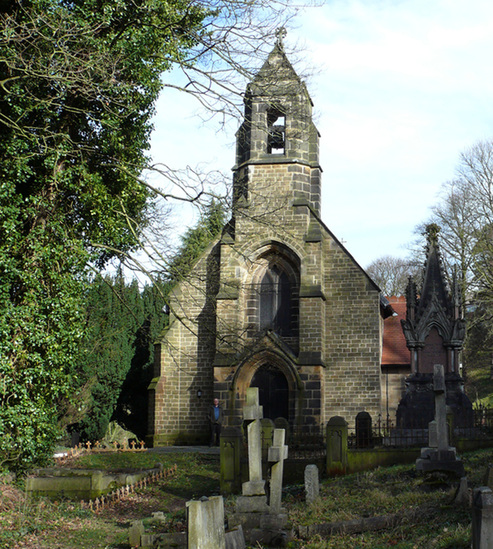